Today I’d like to introduce another top model that rocks the music scene. 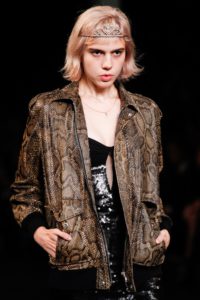 In August 2013, Cumming joined guitarist Nick Kivlen and drummer Jacob Faber in Sunflower Bean, a power trio initially based in Glen Head, New York that had started off a spin-off of the band Turnip King. In the following year, the band moved to Bushwick, Brooklyn and became a part of the borough’s thriving “DIY” scene, playing over eighty shows that year and earning themselves title of New York City’s “hardest-working band of 2014”. The band’s appearance at the 2014 CMJ Music Marathon received good notices from All Songs Considered‘s Bob Boilen, and from The New York Times‘s Jon Pareles, who wrote “New York is still home to bands as varied as Sunflower Bean, whose music suggests what might have happened if psychedelia had emerged after punk and the Police rather than before.”

The band recorded their debut EP Show Me Your Seven Secrets (initially self-released on January 27, 2015) and was signed to Fat Possum Records later that year. The album Human Ceremony was released on February 5, 2016, garnering largely positive reviews;

“I Was a Fool”, the first single released from Sunflower Bean’s upcoming second album Twentytwo In Blue, debuted on NPR‘s “Songs We Love” series on November 3, 2017. Twentytwo In Blue was released on March 23, 2018 by Mom + Pop Music in the U.S. and Lucky Number Music worldwide. 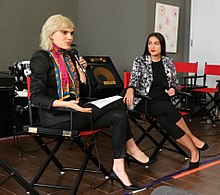 I wish you a relaxed Sunday and come back tomorrow morning with a new story.