I wish you a very happy Wednesday!

Today I´d like to write a story about one of the most multi-talented woman in the world.

Beyoncé was born & raised in Houston, Texas. Her father, Mathew Knowles, manages Destiny’s Child. Her mother, Tina Knowles designs their glittering costumes. Solange, her sister (they’re about 5 years apart), has released her debut album. She dances with her big sister during DC-3 concerts. Beyoncé is of Louisiana Creolean & African descent. 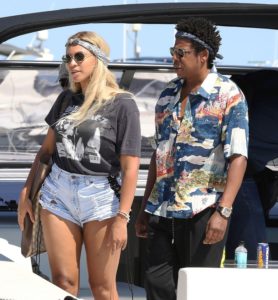 Every musician has merch, but Beyoncé and Jay-Z take everything to that next level. Currently enjoying a break in Nice after two sold-out dates in Paris for their On the Run II tour, the power couple used their time off to show some unique concert keepsakes. Beyoncé stepped out in a Sonic Youth x Jay-Z shirt from Uneek Basement featuring the album sleeves from their respective seminal releases, “Goo” and “Reasonable Doubt.” Paired with lace-up cutoffs from Coal N Terry vintage and a pair of oversize earrings from Messika, the outfit was the right combination of sexy and casual. Beyoncé completed her outfit with a gray bandana worn as a headband that matched Jay-Z’s navy kerchief. In a Gucci menswear blouse covered in a map of the world, the star continued his bohemian fashion reinvention without taking any attention away from his wife’s sultry look.

The Carters have made a habit of dressing in sync, but their latest choices prove they have a sense of humor when it comes to fashion. Though they could be foreshadowing a future project, as of right now, grunge icons Sonic Youth have yet to collaborate with Jay-Z or Beyoncé. While the idea of a Beyoncé meets Kim Gordon moment seems slightly far-fetched, the fictional mashup made for a compelling style statement.

Beyoncé Giselle Knowles-Carter, born September 4, 1981 is an American singer, songwriter, dancer, actress, and businesswoman. Born and raised in Houston, Texas, Beyoncé performed in various singing and dancing competitions as a child. She rose to fame in the late 1990s as lead singer of the R&B girl-group Destiny’s Child. Managed by her father, Mathew Knowles, the group became one of the world’s best-selling girl groups in history. Their hiatus saw Beyoncé’s theatrical film debut in Austin Powers in Goldmember (2002) and the release of her debut album, Dangerously in Love (2003). The album established her as a solo artist worldwide, earned five Grammy Awards, and featured the Billboard Hot 100 number one singles “Crazy in Love” and “Baby Boy“.

Following the break-up of Destiny’s Child in 2006, she released her second solo album, B’Day (2006), which contained her fourth number one single, “Irreplaceable“, as well as the top ten singles “Déjà Vu“, and “Beautiful Liar“. Beyoncé also continued her acting career, with starring roles in The Pink Panther (2006), Dreamgirls (2006), and Obsessed(2009). Her marriage to rapper Jay-Z and portrayal of Etta James in Cadillac Records (2008) influenced her third album, I Am… Sasha Fierce (2008), which saw the introduction of her alter-ego Sasha Fierce and earned a record-setting six Grammy Awards in 2010, including Song of the Year for “Single Ladies (Put a Ring on It)“.

Beyoncé took a hiatus from music in 2010 and took over management of her career; her fourth album 4 (2011) was subsequently mellower in tone, exploring 1970s funk, 1980s pop, and 1990s soul. Her critically acclaimed eponymous album, released in 2013 with no prior announcement, was distinguished from previous releases by its experimental production and exploration of darker themes. Her sixth album, Lemonade (2016), also received widespread critical acclaim, with many referring to it as her most personal work to date, and subsequently became the best-selling album of 2016.

She released her seventh album, a collaboration with husband Jay-Z as The Carters entitled Everything Is Love in 2018.

Throughout her solo career, Beyoncé has sold over 100 million records worldwide, making her one of the world’s best-selling music artists. She has won 22 Grammy Awards and is the most nominated woman in the award’s history. She is also the most awarded artist at the MTV Video Music Awards, with 24 wins, including the Video Vanguard Award. The Recording Industry Association of America recognized Beyoncé as the Top Certified Artist in America, during the 2000s decade. In 2009, Billboard named her the Top Radio Songs Artist of the Decade, the Top Female Artist of the 2000s decade, and awarded her their Millennium Award in 2011. In 2014, she became the highest-paid black musician in history and was listed among Time‘s 100 most influential people in the world for a second year in a row. Forbes ranked her as the most powerful female in entertainment on their 2015 and 2017 lists, and in 2016 she occupied the sixth place for Time‘s Person of the Year. With the release of Lemonade, Beyoncé became the first and only musical act in Billboard chart history to debut at number one with their first six solo studio albums.

Please enjoy the middle of the week and stay connected.