The story of today’s about an iconic  model – musician.

One of the most iconic models of our times, Karen kick started her career by shooting the cover of Italian Vogue with Steven Meisel on her 18th birthday. While she’s been a muse for the industry’s leading photographers and designers, the fiery British redhead remains a musician at heart. She released her debut indie-folk album, The Ghost Who Walks, in 2010. After taking a break for several years, (then marrying and divorcing rock star Jack White), she moved to Nashville and returned with a new record, DOUBLE ROSES, in 2017.

Elson was born in Oldham, Greater Manchester, and attended North Chadderton School as a child, with her twin sister, filmmaker Kate Elson. 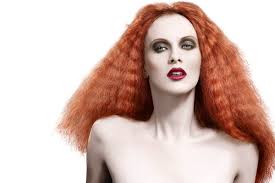 She began working as a model as a teenager and was discovered at age 16 by Debra Burns, the owner of Boss Model Management in Manchester. Elson’s first success came when Steven Meisel shot her for the cover of Italian Vogue on her 18th birthday. She has worked with most of the world’s major fashion photographers and fashion designers, including Arthur Elgort, Bruce Weber, Mario Testino, Peter Lindbergh, Mert and Marcus, Steven Klein, Patrick Demarchelier, Steven Meisel, Ellen Von Unwerth. She has walked the runways of many top designers including Marc Jacobs (which she did while pregnant), Jean-Paul Gaultier, Chanel, Dolce & Gabbana, Versace, YSL, Alexander McQueen, Dior and Gucci. She has appeared in international campaigns for dozens of designers including Yves Saint Laurent, Jean Paul Gaultier, Louis Vuitton, Versace, Christian Dior, Burberry and Chanel.

Her list of magazine covers include over 30 international editions of Vogue as well as W, Dazed & Confused, Numéro, British Harper’s Bazaar, Marie Claire, Elle, Lula, Foam Magazine and Nylon. In 1998 she won the title of Model of the Year at the VH1 Fashion Awards. Photographed by Steven Meisel, she was presented on the September 2004 cover of American Vogue as one of the “Models of the Moment” In 2005, Elson won the British Fashion Award for Best Model.

In September 2008, Elson was on the cover of British Vogue – shot by Nick Knight – as “Fashion’s Red Queen”. It was then announced that Elson was the new face of British department store John Lewis for autumn/winter 2008/09. In the autumn of 2009 she appeared on billboards internationally for H&M.

In 2010, American fashion brand St. John announced that Elson would be replacing Angelina Jolie as the new face of their company. In 2011 she was replaced by Kate Winslet. For the Tom Ford 2009 spring eyewear advertising campaigns Elson and male model Jon Kortajarena were photographed, for the first time, by Tom Ford himself.

Elson is currently the face of YSL Opium perfume. She appears in the autumn/winter 2010/11 ad campaign of Louis Vuitton along with Natalia Vodianova and Christy Turlington, as well as the Trussardi 1911 spring 2011 campaign. She was shot by Mert and Marcus for Roberto Cavalli‘s autumn 2011 campaign. Karen appears in the Steven Meisel autumn 2011 Lanvin campaign. The accompanying promotional video shows her dancing with Raquel Zimmerman to Pit Bull‘s “I Know You Want Me”. Karen appears with her non-identical twin sister Kate Elson in the 2011 H&M Holiday campaign. She is also the face of Banana Republic‘s 2011 Holiday Collection. 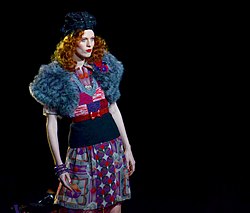 Elson has appeared in many short films and videos, including the music video for the White Stripes‘s “Blue Orchid“, directed by Floria Sigismondi. She has also appeared in fashion films such as Steven Meisel and Darren Lew’s War Opera, Nick Knight‘s Andy Warhol-inspired series More Beautiful Women, Craig McDean‘s 48 Girls, and Bruce Weber‘s Petit Fleur, Harlequin, Voodoo Daddy, Closer Walk With Thee and Karen’s Boogie(all films were made in conjunction with W as a tribute to New Orleans). Elson has been featured in commercials for Kose cosmetics. She has also appeared in the short film Lay Down Lean, a project by the experimental filmmaking team the Belles of the Black Diamond Field.Lay Down Lean, by the Belles of the Black Diamond Field.

Elson has contributed to Nick Knight‘s fashion site SHOWstudio.com since 2002. She also contributed to Knight‘s project “Moving Fashion” with a black and white video of herself in a sequined gown, perched upon a swing. The images were accompanied by Elson playing the autoharp and singing a verse of Marlene Dietrich‘s “Falling in Love Again.”

In 2010, she modelled a Patricia Field dress for the Sex and the City Archive in the Naomi Campbell‘s Fashion for Relief runway show for the White Ribbon Alliance to raise funds for mothers in Haiti.

On 9 May 2011, it was announced that Elson has designed her own line of shoes, bags and jewellery for fashion brand Nine West. The items became available in the autumn of 2011.

In August 2012, Elson was one of eight British models chosen to walk during a segment at the 2012 Summer Olympics closing ceremony. She wore a gold gown by Burberry and walked the stadium with her fellow models to David Bowie‘s song “Fashion.

In 2016, she became the face of fragrance brand Jo Malone London and as such represents them worldwide by hosting events.

Elson is a founding member and performer with the New York-based political cabaret troupe the Citizens Band, appearing with them at various theatres as well as the downtown art gallery Deitch Projects since 2004. Critical response to Elson’s performances have been unequivocally positive, with the press frequently commenting on her striking vocal skills. As one of the leaders of the Citizens Band she has performed a variety of songs including covers of the Velvet Underground, Kurt Weill, Elvis Presley, Mimi and Richard Fariña, Pete Seeger, Leonard Cohen, Neil Young and Marlene Dietrich. She has also written and co-written songs for the troupe’s performances. Her cover of the Velvet Underground‘s “Candy Says” is available on the Citizen Band’s MySpace page. Short samples of her performances are available on the troupe’s website as well.

Elson’s musical career built slowly over the course of several years. In 2003 she contributed backing vocals to a remix of Robert Plant‘s “Last Time I Saw Her” from Plant’s album Dreamland. In 2005 a personal recording of Elson singing was made available on a CD accompanying the August 2005 issue of Uncutmagazine (the song was titled “Coming Down”). The song was chosen by REM singer Michael Stipe. In 2006 she dueted with Cat Power on a provocative cover version of “I Love You (Me Either)” for Monsieur Gainsbourg Revisited, a tribute album to French singer/songwriter Serge Gainsbourg.

Her first full-length album was written, for the most part, in secret without letting her (then) husband Jack White hear what she was doing. “At home I would hide—I would play my songs really in isolation. I would lock the bathroom door and hide. Eventually he was like, ‘Why are you hiding this from me?'” In February 2010, it was announced that Elson would be releasing her debut solo album The Ghost Who Walks, produced by Jack White. News of the album’s release was made by a live acoustic performance video “The Ghost Who Walks (Acoustic)” posted on the internet. The album was released on Third Man Records via XL Recordings in May 2010. It received generally favourable reviews. Spin magazine gave it 7/10 and compared her voice to both Jenny Lewisand Loretta Lynn.

On 2 September 2010, Elson and her band performed on the Late Show with David Letterman. The fourth season of HBO TV series, True Blood, featured Elson’s cover of “Season of the Witch” over the credits of the episode “If You Love Me, Why am I Dyin’?”. The thirteenth episode of Fringe Season 4, “A Better Human Being” featured Karen’s song “The Ghost Who Walks”.

In September 2012, she was featured in a campaign called “30 Songs / 30 Days” to support Half the Sky: Turning Oppression into Opportunity for Women Worldwide, a multi-platform media project inspired by Nicholas Kristof and Sheryl WuDunn’s book In October 2013, Elson opened for Neko Case for eight concerts on Case’s North American tour.

I wish you a beautiful Sunday and come back very soon with a new story.